It is just barely 8.30 AM on a late December Sunday and I am crunching over snow in damp leather boots, wearing the same clothes from the night before. Here, in quiet rolling rural Pennsylvania, the snow and the ice and the silence and the cold have settled into the land and the air. However, today it has started to warm up, in a freak accident of winter, and the fields and the horizon are thick with white fog. Black trees divide fallow fields into loose grids and here, the fog floats at knee level as the snow and the ice dissipate into the atmosphere. My camera is ten miles away, nestled in it's bag on a chair, and I am cursing myself as I head toward 147 at 40mph.

Oh, this this this and that would be such a good picture. Oh god look at the color and the lines. I need to photograph out here. Over and over again, until the NPR station I have blaring* fades into nothing but static as a I get closer to town, which I find strange.

Everything is slick and wet and car tires make that noise, that amazing noise that car tires make over wet, smooth asphalt on highways. The rolling hills are white and patchy and that fog floats at the perfect height so that one can see the top and the bottom of whatever is in sight: mountains, houses, cows, cars.

I often neglect to talk about moments here when they aren't punctuated or illustrated with photographs. That recent Sunday morning was a moment I remembered that I love talking and writing about landscape and memory and place as much as I love to photograph it. It was reminder that just because I don't have images to share doesn't mean I don't have anything to bring to you, Gentle Reader.

* I am that person that listens to NPR so loudly you can hear it with my car doors closed. 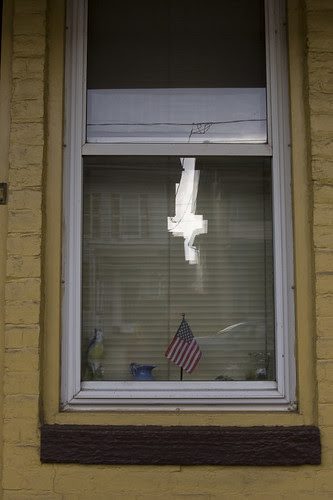 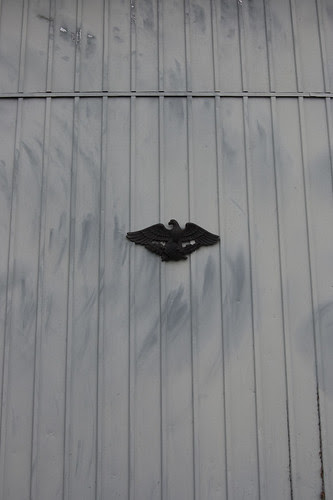 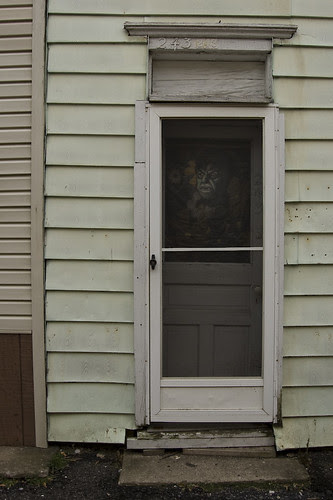 I really like taking photographs like this and it's been awhile since I have. That middle and the werewolf, oh, they get me good.

I'm Wandering, A Loser Down these Tracks. 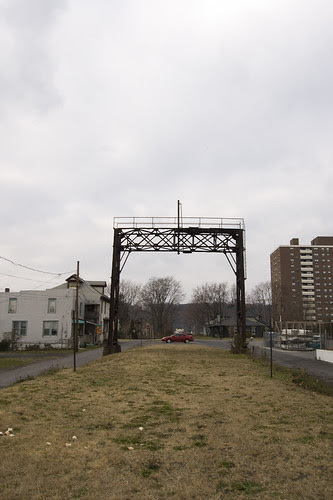 Former Right of Way, South Second Street, Sunbury
I've been thinking, as much as I can think about non-work related...things, about the railroad. The steel rails that criss-cross this country have worked their way into my perception of space, understanding of transportation and the movement of freight. At night, I can hear the low, haunting whine of freight trains that rumble through the industrial park half a mile from where I lay my head. As I've mentioned before, I have really started to pay attention to the space that they occupy and the place that the right of way passes through. I find the terminology related to railroading to be quite interesting.

I had these ideas in the back of my head as I circled downtown Sunbury on Thanksgiving morning. As I've written about before, the train tracks in Sunbury run through town, slicing the town into two uneven parts. It was quiet and cold with the sun perpetually disappearing behind the clouds.

After I circled around town a few times, I parked my car next to the former Augusta House restaurant and started to walk. 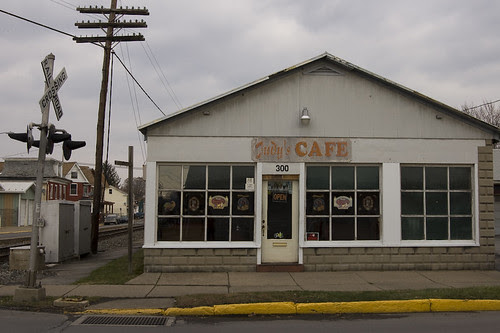 Judy's Cafe
I have a loose rule about photographing in towns, which I like to think allows me to see a bit more than driving around aimlessly. I walk 2 to 3 blocks away from my car, 2-3 blocks over and then walk back, forming a square or rectangle. I allow myself to wonder around and within that blocked off area, as a way to get a taste of the place I am. This way, I can return to a town again and again and in theory, I have a way to see the whole thing in bits and pieces. A place seems less daunting in blocks and numbers. 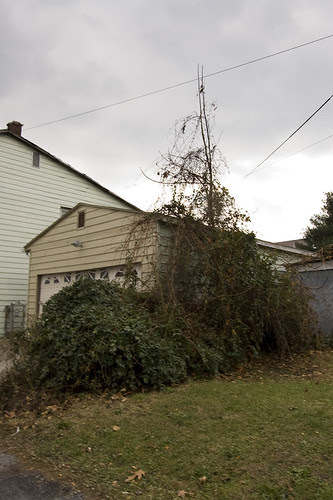 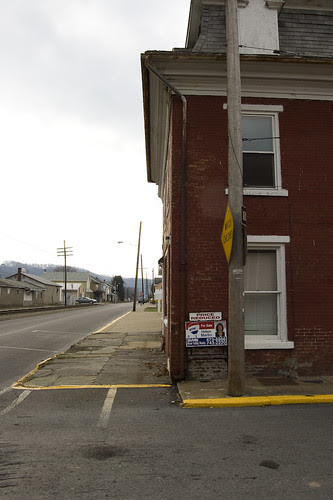 The south side of Sunbury is scarred with the past. The greying South Second Street leads out of town but not before passing silent school houses, worn houses, and remnants of industry. The train tracks run along on South Center Street, which is where I found myself towards the end of my exploratory morning. Taking long steps across the ties, I passed houses so close to the tracks that their front yards were thick gravel. 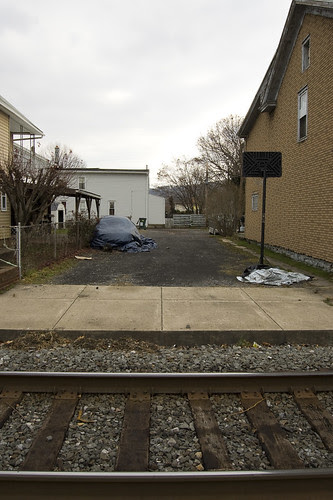 Hiding on South Center Street
I hadn't ever really seen this space before and I was struck by the staggered and strange juxtaposition of the houses on the left side of the tracks versus the right. Respectively, one side was dilapidated, with chipped paint and neglect while the other was well-kept and lawn-ornamented. I walked along the ties with the same strange step until I came to the last cross street in town. Here, the tracks passes behind the Weis Distribution center and in front of a groomed cemetery. 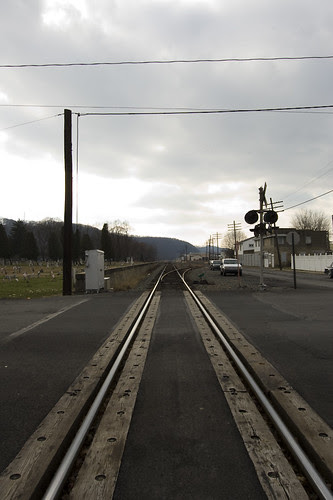 Wrong Side of the Tracks, South Center Street.

Here, that cross street marks the elusive edge of town. There are buildings, some houses, and a gas station beyond this point but the tracks follow the Susquehanna and then head out into farm land and mountains thick with trees. Edge of town: this demarcation seems loaded, heavy with potential and well, to be Springsteenian about it, darkness.

I didn't get very far beyond the cross street. I crossed it but didn't get much further, though I wanted to keep walking. I had been gone for much longer than I anticipated and hot mashed potatoes and gravy were waiting back at the house. As always, I made a mental note to return for another day. 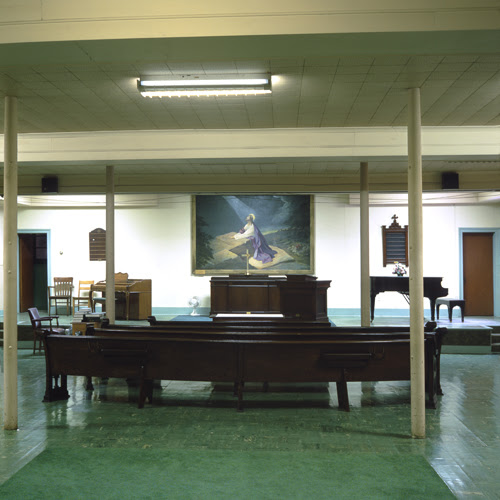 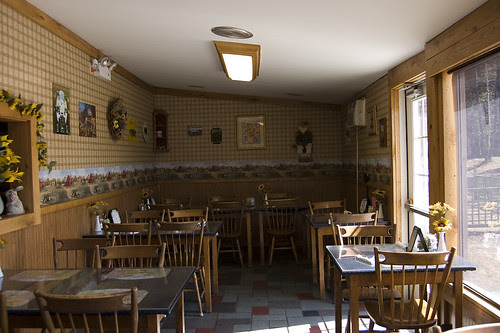 Traveler's Restaurant, near the CT/MA border on I-84.
Holiday tradition, since 2006 has involved driving from Boston, MA to Allentown, PA. The six hour drive was punctuated by all of the familiar landmarks and stops. It got to the point that from any given place along the route that I traveled, I knew approximately how long it would be until I got home, within ten minutes or so.

This year, that holiday tradition was (thankfully) broken, as I've moved back to the place I really call home. It felt weird not to set off Wednesday morning from the outskirts of Boston, pointed southwest, my car's wheels coasting over the cold asphalt at 70mph. Thanksgiving this year was a mere hour drive, along curving back roads with high beams guiding my way.

I found this one on my harddrive, along with some other ignored goodies, and I really like it. The repeating pastoral scene on the wallpaper border is something full of brilliance, given the landscape is punctuated with John Deere tractors. I took it on a trip to Lebanon, CT with A. Kilton and her polaroid in tow, for Easter dinner at her aunt's house. That trip is yet another series of directions and sights and smells and experiences that composed a holiday tradition that became my own. It will be broken this year; after all, I moved home and back into traditions that were only ever partially mine to begin with.