Lebanon Middle School, Lebanon CT.
I am not particularly emotionally invested in baseball. I grew up only vaguely aware of the Philadelphia Phillies perpetual defeat. Football was the staple sport in my house and in my family; rarely was there a weekend when someone wasn't going to a Penn State football game. Football blared from the TV from late August until January, when the Superbowl's last seconds ticked down in the corner of the screen. Sure, I've been to baseball games (The Former Scranton/Wilkes-Barre Red Barons) and I understand the basic premise of the game. I won't ever ask what quarter the game is in, I vaguely understand stats, and occasionally I listen to a game on the radio if I happen to catch one. It was only recently I admitted my love of football to the outside world, as sports were a symbol and part of dominate culture in the U.S. that was really alienating to me. They still are part of that culture, but more recently I've found myself able to relax and enjoy them. Games are better digested live, instead of through a TV screen. I look forward to going to IronPigs' and Penn State games when I move home.

But I don't love baseball. I feel like I should love baseball, given it is America's Pastime and everyone knows that I like to be a good American . There is something about it that is closely linked to early 20th century history, the rise of leisure and the middle class. It's kind of romantic, in the context of history. I don't really know anyone who doesn't know who the Babe or Jackie Robinson is or why they're Important. Honestly, I'm totally winging this from my impression of baseball in America but it seems so closely tied to democracy in a way that I can't quite put my finger on. I also suspect that it's tied to the American dream. Movies like The Sandlot and Field of Dreams are gleaming examples of this; work hard and you, too, can have success and fame and prosperity, despite whatever obstacles of class and race you will have to overcome! 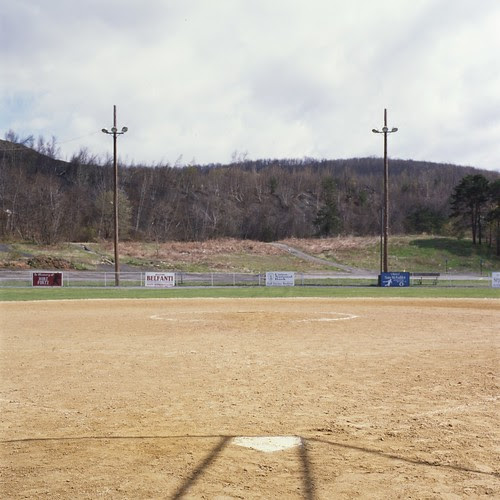 Mount Carmel Little League Baseball Field, Mount Carmel PA.
Baseball diamonds dot the American landscape. Rarely can you drive through a small town that doesn't have something resembling a baseball field, be it overgrown or perfectly manicured. It is something huge when a new stadium goes up or an old one comes down. There is something strangely magical about standing at home plate or on the pitcher's mound of ANY baseball field, be it Fenway Park or the field down the street with no lights or bases. One can't help but feel connected to something bigger than themselves, as the baseball diamond is so pressed and adhered to the collective memory of the U.S. 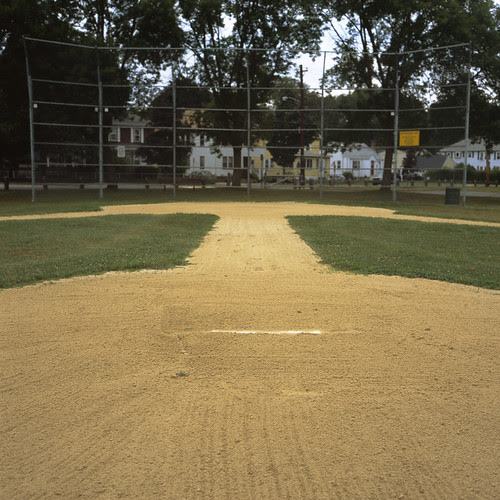 Pitchers' Mound, Framingham, Ma.
Over the past year or so, I've taken notice to baseball fields, photographing them if I get the chance to. I love the way dilapidated or DIY'd backstops look. I like the freshly combed dirt, the overgrown outfield, and the geometry of the diamond from the corners of my eyes when I'm standing at home plate or on the pitchers' mound. While baseball diamonds are designed to function the same way and hold a specific sport, it is endlessly fascinating to me their immense variation, which is tied to location, class and level of skill of the teams that play on them. I find them to be really amazing things to photograph and awesome spaces to occupy. I recently started a flickr set, Playing Fields, where I'll put any and all future developments in this strange, totally-out-of-context interest of mine.

Build it and they will come, right? 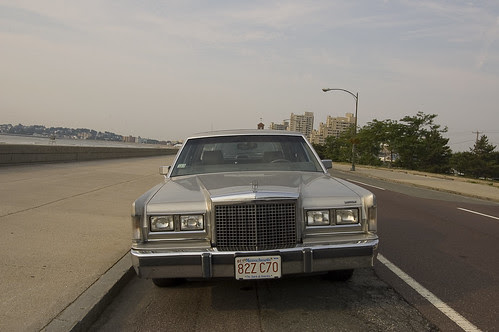 A Huge, Old Lincoln. Revere, Ma.
Photographing has always been an escape from my day-to-day life. I have considerable trouble making photographs in my every day observance of the world because, I suppose, photography is about escapism for me. I find the act of making a photograph is about seeking and exploration; I rarely let them wonder into my life unexpectedly. It’s not as if every single photograph I make is premeditated or I knew exactly what I wanted. It’s more like I set my sights on a place or an idea or even at the suggestion of history and then those pictures can come to me.

A Virgin, Condemned. Somerville, Ma.
I often ponder over missed photographs that are worthy images but don’t find their way into my camera because I’m not paying attention with my photo-brain or I hadn’t gone out that on particular instance to make photographs. I’ve tried to do that romantic “always have a camera with you” notion in the past to find myself lugging around a camera that I am not paying attention to.

I have an on-going list of specific places that I want to go out and make pictures of. They aren’t limited to one particular thing or place or state or town. That list extends in all different directions, from mere ideas to specific places that are linked my personal history, to fleeting objects and places that I see in my day-to-day life. The list is vaguely organized by place and also happens to be a 2 paged double columned Word document. 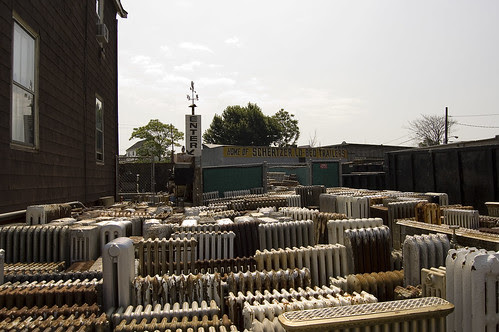 All the Radiators One Could Ever Want. Somerville, Ma.
I always think about pictures when I am moving about the world. The act of photography, for me, is a deliberate and focused action that requires some traveling, serious concentration and dedicated time. I can’t just hold up a camera to my eye during my life and make the pictures. It seems that the act of making photographs is less immediate and more about meditation, slipping into a place of intense observation of the world where I am mostly watching and only sort of participating.

I always find myself blabbering to people I don't know about my work. Sometimes, I suspect that it makes me seem interesting and it gives me something to talk about to people at parties, bars, laundromats, and other such public places when I am (as always) feeling awkward and misplaced. They, in turn, ask me if I have a website. This results in brief confusion over the website name and a "Oh, I'll totally remember that", knowing I missed out on an opportunity to get someone, anyone to look at my photographs, even if they are just my parents' friends with ties to art foundations in the L.V. or a family friend with links and access to the coal region.

I had 500 postcards printed up last spring for my senior show but carrying around 6x6 postcards all the time "just in case" is a huge pain in the ass. So, I said "Self, let's get some MOO cards so that when the conversation arises next time you have something to hand out!"

I personally think Flickr (if you don't know by now...) is one of coolest ways to catalog, share, print and use photos. God bless their little hearts for hooking up with companies like MOO and Blurb to make self publishing not only accessible and affordable but top quality.

I got my first set of MOO cards in the mail today and they are so awesome; they're like this little package of one hundred "Wee!"s. The color is pretty good, with virtually no color shift. They are, however, a little dense but they're not that far off from what I would want them to be. I had ten of my favorite Coal Hunkie shots cropped and made into cards. They're so adorable. I absolutely cannot wait until I get to hand them to people and to make another set with the stitched photos I've been working on. I also plan on taking advantage of Blurb at some point; it has the potential to serve up something awesome. Say, a book of this here blog, perhaps.

The Paramount, Asbury Park.
Tuesday morning, around 10.30, I filled my gas tank at the WaWa out on 100, punched in Asbury Park, New Jersey into a borrowed Garmin*, and pointed my car east on I-78. I've spent little time in Jersey, with the exception of a vacation here and a bus trip to NYC there, my life generally has been spent ignoring the eastern neighbor of Pennsylvania.

My interest in Asbury Park, admittedly, was sparked by my intense love of Bruce Springsteen. His first 4 albums invoke imagery of a gritty seaside town and it's former glory as a place of summer play. Around the time I fell in love with The Wild, the Innocent and the E-Street Shuffle, I read Fourth of July, Asbury Park: A History of the Promised Land by Daniel Wolfe. Fourth of July is a detailed look at the strange, strained history of Asbury Park. Founded by James A. Bradley (our headless statue below) in 1871, it was originally billed as a place for the moral to come and be rejuvenated by the healing waters of the Atlantic, as well as to worship in the Methodist tradition. 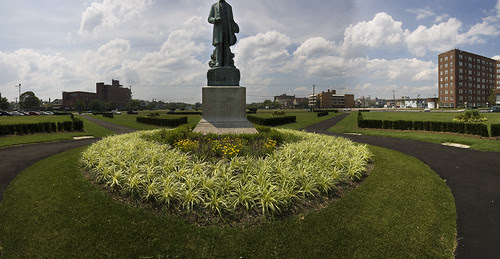 James A. Bradley
The history of Asbury Park is outlined and colored by the religion's strong hold on the city's progress, intense racial divide and by Springsteen's lyrics. I thought about this as I rolled through the town's wide flat streets and gazed across lots of raised buildings along the famed Kingsley Street, the town's main drag that runs parallel to the boardwalk and to the Atlantic.

I didn't really know what to expect when I decided to make the trip. I knew that a lot of the iconic buildings had been knocked over or left to decay. I didn't really expect new businesses going in along the boardwalk or the open spaces or the strangeness of the old seaside hotels being used as places of residency. New condos stuck out among dilapidated two-story hotels and the flat space the defined the beachfront. The Casino.
The boardwalk is anchored on one side by the iconic decayed facade of the Casino, which is currently undergoing construction. At the other end, is the newly revived Paramount theater, it's gorgeous detailing brightly re-painted. Most of the old buildings along the boardwalk have been re-faced or raised in favor of new development. I was surprised to see the incredible amount of empty lots and open spaces, waiting for developers to come in and revive Asbury Park to it's pre-car glory.

Sunset Avenue Pavilion.
I parked close to The Stone Pony and spent the day dragging my sandaled feet along the boardwalk. I ended up at the Ocean Grove Pier, looking up and down the Jersey coast. It was a comfortable day and the sun was high and bright above me for the two hours I poked around. By the time I was finished with photographing the boardwalk, I had acquired a nasty sunburn. I took to driving around the town and debating taking a swim in the Atlantic for five bucks. My skin, in protest, throbbed, even with the air conditioning blasting. I decided to head home, despite wanting an ice cream and a dip in the ocean and more photographs. The drive home to PA was uneventful and I made notes of the names of places in New Jersey I should explore while I'm living at home. 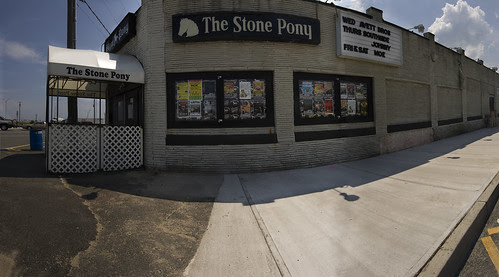 * I generally avoid using GPS-thingies but I wasn't up for getting seriously and painfully lost in New Jersey. The cliche of "What exit are you from?" is acurate; the interstate system is windy, difficult to navigate and fucking enormous.